No Photo Ops, With the Fucking Cops 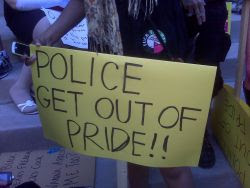 The Ladies Anarchist Solidarity Society is forming an anti-policing contingent at Toronto’s Pride Parade while the Toronto Police continues to march at this year’s event, the 30th anniversary of the Toronto bathhouse raids. Taking part in a parade that grew out of protest of police conduct is seen as a form of community dialogue by police who have increased their presence since Bill Blair became the first police chief to march in 2005.

Some members of Toronto’s queer community object to TPS’ presence and see it as another form of pinkwashing in addition to the ongoing corporatization of Pride. Ashleigh Ingle believes that “we should not see the presence of our violent oppressors at our celebratory protest as a victory... we should not want their acceptance.”

Problems with the police faced by the queer and trans communities have been many, from the criminalization of consensual sexual acts to systemic harassment and brutality.

The Ladies Anarchist Solidarity Society (LASS) has called for an anti-policing contingent at this year’s parade “to be vocal for the members in our community who can't because they are continually targeted by police” and to “remember the roots of Pride”. They see it as important to not forget past struggles of the queer and trans community against the police and not condone its continuation today by uncritically accepting or encouraging police participation.

A Pride Toronto organizer who declined to be named expressed conflicted frustration while justifying police presence, “On one hand, we don’t want to put our volunteers in danger -- if anything were to happen. On the other, how do you have police presence when large portions of your community have been marginalized or brutalized?”

Resistance by members of the queer and trans communities hasn’t just occurred in the distant past at events like Stonewall and local riots in response to police raids and brutality. Last year in response to the treatment of queer and trans detainees at the G20, community members stormed the 519 to interrupt a speech by Bill Blair. An OPP recruitment event targeting the queer community was also shut down this past fall by the Queer Resistance Network who advocated “finding our own solutions to our own problems without the state.”
Posted by Jae F. Muzzin at 11:46 PM

Remember to let everyone know about this blog! Use the "Share it" box below to promote SoC on Facebook and Twitter. Follow us by email to stay up to date on news about institutionalized police abuse!